The Age of the Platform (Three Stars / Recommended) 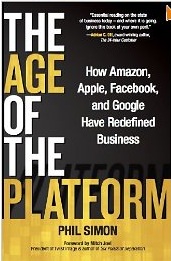 Remember Superman? Remember being a kid, watching on TV, and that famous introduction – "Look, up in the sky! It’s a bird! No, it’s a plane! No, it’s Superman!" What a relief it wasn’t a bird, or a plane. Because if it were just a bird, or just a plane… It wouldn’t have been able to rescue the honorable citizens of Gotham City from the Riddler. No, wait. That was spiderman. Or batman. Which was it? Why do we care?

Definitions and Concepts Matter. That’s why. Phil Simon’s new book, The Age of the Platform is one of those books that you read, and enjoy, not because it’s well written, not because it is conceptually clear or elegant but because it makes you think. The book is messy, the book fails to really define what at ‘platform is’ in any meaningful way, and fails to connect the dots that connect Amazon, Apple, Facebook, and Google into a unifying set of companies. But no matter, it’s a book that’s well worth a read because…

Because it asks important questions. Such as ‘Is Google a monopoly?’ or ‘How do big companies today – like Google, Facebook, Amazon, or Apple both work with and work against their competitors or suppliers?’ It’s not just that they are like monopolies, it’s that they – on the one hand – build up easy-to-use software and great platforms for potential third party applications, but – on the other hand – ruthlessly squeeze suppliers and partners, when push comes to shove. Example: Amazon.com. Its Amazon associates program was one tactic it used to grow, leveraging people like me in California to promote its stuff. Then, when the tide changed, it threw us all under the bus, and lobbied the state of California as well to knuckle under to the no-sales-tax proposals from Amazon and its ilk.

Amazon: A great wonderful company that plays hard ball when needed. But not just why? But how?

Similarly with Google. Is it a monopoly? Simon says, no – it’s a platform… But Google certainly acts like a monopoly – it has over 80% market share in search, sets the prices for AdWords through a mysterious ‘auction’ that is not at all transparent to the average AdWords user, claims not-to-be-evil, and then systematically squeezes competitors like Yelp by giving prime-of-place to its own Google Places listing. Therein lies the rub – monopoly or not, platform or not, ecosystem or not, Google has enormous market power (as does Apple, as does Facebook, and as does (to a much lesser extent), Amazon)… Does it matter if it’s a plane? A bird? Or a superman?

What is a Platform?

This text defines a platform as an extremely valuable and powerful ecosystem that quickly and easily scales, morphs, and incorporates new features (called planks in this book)…. The most powerful platforms embrace third party collaboration…

Here’s the confusion. Lots of companies want to be platforms, but only few succeed. Why? First and foremost: network effects. Companies like Facebook benefit from everyone using them, the more users who use them the more useful they become. Once they reach a ‘tipping point,’ or a ‘point of non-displacement,’ then they become very, very difficult to replace. So today’s Facebook may not be called a monopoly but because of network effects, it can (and does) act like a monopoly. Concepts such as ‘viral loops,’ ‘network effects,’ or ‘points of non-displacement’ would have made substantial additions to The Age of the Platform, yet where discussed, the discussion is fleeting at best. Second, understanding network effects and lock in would help us avoid the absurdity of thinking that Google isn’t a monopoly, or Facebook isn’t a monopoly. Just ask Yelp if Google is a monopoly! Once the point of non-displacement has been reached, expect Facebook or Google to act just like Microsoft. And so they do.

Now, I am an intellectual – Berkeley Ph.D., Harvard B.A. – all that jazz – but debating what is a platform, and how these businesses work doesn’t really interest me. I am more interested in how I as a small business, or my clients, as small businesspeople can leverage platforms to grow their businesses. The practical impact of companies like Google, Amazon, Facebook, or Apple is much more interesting than esoteric debates about the latest novel concept attempting to become the business buzz book of the week.

So why do we care?

What is so intriguing about these four companies is that now that they so dominate their niches, you and I can attempt to work with them as ecosystem partners to grow our own business. They help us, and as long as we stay out of their way, we can hope to profitably leverage them.

So, first, Google. Google as a monopolistic platform, gives us a two great ways to grow a business. One, SEO – manipulating Google’s relationship with our website to show up high on search results. Google’s brand means people go there, first, for search. And SEO gives us as small businesses an opportunity to be ‘found’ via Google, for free! How cool is that? And two, AdWords – the much inferior partner – paying Google to advertise, and thereby also be found. By leveraging Google’s platform we can grow our business.

Second, Apple. One, the iTunes store helps artists and musicians be found, be discovered and grow their businesses. And two, Apps for the iphone also create a marketplace of ideas and app’s. Both of these – like SEO and AdWords – enable other busineses to help themselves as they help Apple expand it’s ‘lock in’ on a vibrant economy of music and applications for mobile.

Fourth, Amazon. One, let’s just look at books. Amazon creates an online bookstore, and through applications like Kindle gives authors a platform to reach those readers. The competition becomes (like SEO) how do you ‘get noticed’ on a very crowded platform, how do you get your book (or your website, or your app) to be noticed on Amazon?

And there’s the rub. All of these companies have reached that point of non-displacement, that network effect that so benefits them yet it doesn’t directly benefit us. Over time, the terms of the relationship deteriorate (example: AdSense by Google, which was once a great program and now is virtual slavery for vendors), as the platform company grows ever more powerful, more monopolistic. Which brings us back full circle: as small businesspeople, these platforms are great FOR THEM but not so much for us. That discussion – the platform’s effects on the ecosystem – is completely missing from The Age of the Platform, sadly. What do platforms mean for society? Example: Amazon’s destruction of the ecosystem of physical stores and the related tax revenues from sales tax? And what do platforms and ecosystems mean for the ecosystem partners? Example: Amazon and its impact on the publishing industry, on the old ways of promoting books and the new ways of promoting books?

That’s why this is a great book. Not for the answers it gives, but for the (implicit) questions it poses.